Starframe's rope physics is the first piece of physics code I've written that I designed entirely myself. This is a short story of that design process and the challenges and solutions found along the way.

Having just implemented XPBD, I was thinking about things it's uniquely good at that would also make for interesting game mechanics. One of the method's big selling points is unified handling of particles and rigid bodies, which makes coupling between the two relatively easy to achieve. A rope is one of the simplest constructs you can make out of particles (this post has some fun interactive examples), so it didn't take me long to arrive at the idea of connecting bodies together with ropes. It felt like something that I could pull off technically and that could also generate a lot of interesting game design.

A rope on its own can be represented as a simple chain of particles with distance constraints between consecutive pairs of them. I had already implemented everything required to do this. There are some interesting details here that I'll get into later, but first, let's talk about the more novel part — two-way coupling with rigid bodies.

There were two things I needed for the kind of two-way coupling I was looking for. The first was attaching a rope to a rigid body, which was trivial — in XPBD, attaching a particle to a rigid body is no different from attaching it to another particle, which I already did to build the rope itself. The second was collision detection, which was a lot less trivial.

My initial idea for collision detection was an ambitious one. In order to have no gaps between particles that things could possibly pass through, I wanted to connect particles with capsule shapes as illustrated here:

I would first solve the rope's internal constraints on particles, then generate these capsules and solve collisions on them, and finally reposition the particles again from the capsules' new positions.

So I got to work. The first step was to implement collision detection for the capsule shape, since I only had boxes and circles at this point. This was a fairly tricky task in itself and took a few days of intense debugging to get every edge case right.

Some more tinkering later, I had built a rope out of particles connected with capsules as described earlier. Code for the particle-capsule coupling had to be scattered all over the solver, but if it worked it would surely be worth that complexity. I fired up my testing sandbox and saw a rope that settled nicely against the side of the box it was hanging from! I then started yanking it around with the mouse and, well, 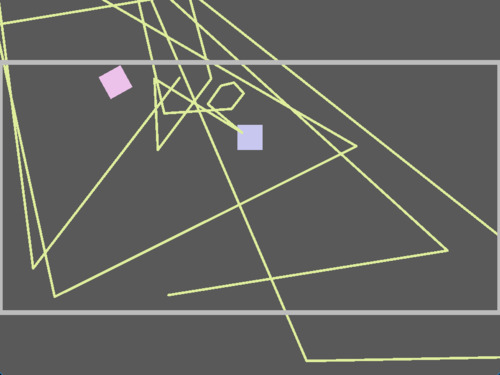 It exploded. It wasn't stable. I hoped this might be an implementation bug, but eventually had to admit it wasn't. What I hadn't considered was that every particle was part of two different capsules, and if those capsules moved in different directions, the particle would have two competing positions to choose from. In some unfortunate configurations this would pull itself into a wall and blow up violently, and there was nothing I could think of that I could do about it.

So I had to admit defeat and toss this capsule idea in the bin. I replaced it with something much simpler that I knew would be stable — every particle gets its own collider, no coupling shenanigans at all. A rope is now just a chain of little circles like this: ○○○○○○○○○○○○○○○○○○○○○

This means I had to abandon my grandiose plans of never having gaps in a rope, but I can compensate by making the particle spacing so small they overlap. I can't have super stretchy ropes now because stretching creates gaps, but I can game-design my way around that limitation.

Allowing the colliders overlap meant I needed to make them ignore collisions with each other. I did this by implementing a layer system and assigning all rope particles to a layer without self-collision. A limitation of this approach is that ropes don't collide with themselves or each other at all, but this is fine for my purposes.

In practice, this turned out to work quite well already. Bodies would slide along ropes and vice versa in a plausible-looking way. However, stretching sometimes let bodies wedge themselves between rope particles, stopping them or making them tumble. I came up with a cheeky little trick to alleviate this — rather than using the actual collision normal, why don't we now pretend we're still doing the capsule thing, and use the normal direction of that to move things apart? Here's a close-up illustration of rope particles colliding with a box: 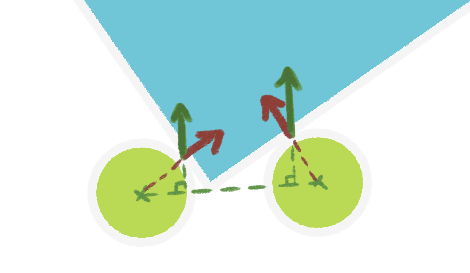 The red arrows here are the original collision normals, each of which would push the box towards the other particle. Resolving the collision using the green normals instead pushes the box away from between the particles faster and makes it less likely to get stuck.

At this point I was very happy with this solution and couldn't think of anything to add, so it's finally time to show you a nice flashy gif.

There was also a confusing problem with friction being very strong in one direction but weak in the other. This turned out to be caused specifically by static friction, so rather than investigating further, my solution was to turn static friction off for ropes :)

If you just connect particles with distance constraints and leave it there, they can spin around each other without any limits. However, real ropes have some thickness and rigidity that prevents them from bending to extreme angles. To this end, I implemented a special angular constraint between three particles. 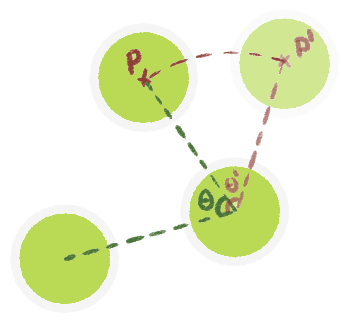 For each group of three rope particles, I take the angle Θ and move the third particle P in a circle until that angle is above a limit value Θ', ending up with the particle at P'. I gave the constraint some compliance (see my post on constraints) to allow more extreme angles to occur under pressure. I also added some velocity damping to slow down angular movement, simulating internal friction in the rope.

This is hardly a realistic model, but I'm making graphics and games here, where appearance is all that matters. And I generally like how this looks — ropes tend to move in a pleasantly restrained way, and when bunched up they make these little bends instead of falling completely flat. 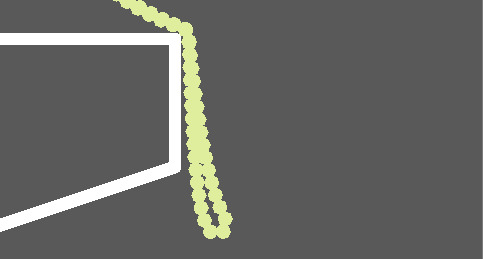 I have this weird entity system I call the Component Graph that I've written a bit about before (though much has changed since). I thought it would be a fun test of its capabilities to try and represent my ropes entirely in the graph without any external data structures. This was my first attempt at making it do something an ECS can't, and led to some pretty fundamental changes to the entity system itself.

This seemed worth doing because the specialized damping and three-particle constraints didn't map cleanly onto my existing constraint system. If I was only doing distance constraints, I would probably have just slapped regular constraints on pairs of particles and called it a day.

I feel like this post isn't the right place to explain the whole system in enough detail to understand all the little things I tried and changed. Consider this a teaser for a deep-dive post on the subject when I have a few more experiences to talk about ;)

For now, the most comprehensive explanation of the current incarnation of this system is in the module documentation in the source code.

Long story short, I ended up changing the whole conceptual model from a directed graph to an undirected one, added some more explicit control over the deletion algorithm, made some other unrelated improvements, and ended up with a rope representation looking like this:

The Rope node contains the physical properties of the rope, and each Body-Collider-Pose triple is a single particle.

This is working pretty well for me so far. It isn't anything you couldn't implement with, say, an ECS and some external structure to identify rope particles, but having the entire structure in the entity system gives me some cool features for free that may or may not otherwise take a bit of thought:

Around this time I also did a bunch of general optimization work (which I'll write another post about some time). With all this done, I was satisfied enough with my physics to start working on an actual video game making use of it. That game is called Flamegrower, and it's about burning some evil alien plants out of existence. It's open source (though I've yet to figure out exact licensing) and you can find it (or what exists of it so far) on GitHub.