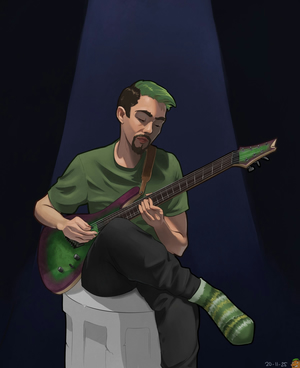 Mikael Myyrä, known online as Molentum (a pun on his last name which translates to Mole), is a professional programmer, university student majoring in computer science, and general nerdlord from Jyväskylä, Finland. He has unreasonably high ambitions in all areas of his life, especially his hobbies. The most prominent of these are game development, graphic art, music, disc golf, and competitive Beat Saber. As of fall 2021 he is studying for his master's degree specializing in simulations at the University of Jyväskylä, while also working part-time as a fullstack web developer at the same university's Digital Services, and still somehow finding time to write exhaustingly long run-on sentences about himself in third person on his website in a (likely doomed) attempt to sound just pretentious enough to come across as competent and respectable but not so much as to be offputtingly pompous.

When it comes to coding for fun, Mole's passions lie in geometry and movement. In other words, if it involves vectors and matrices, he's probably interested. If it makes pictures appear on a screen, he's already hooked. His pet project and the primary subject of his blog is Starframe, a 2D game engine with a focus on side-scrolling physics. He has strong opinions on game design and considers himself an expert on platformers.

In art he's a big fan of fantasy and surreal horror themes, and simple, stylized workflows with strong shape designs and heavy contrasts. In music, it's heavy metal all the way. Anything heavy goes, but progressive melodic death metal is his favorite subgenre. He also plays the guitar and is slowly learning to write his own music.